For the next round of the ICC Moot Court Competition, the organizers expect 66 teams from 46 countries. Each team consists of up to five students, namely three speakers and two researchers.

The team representing the University of Passau consists of two German and three Erasmus students, who share their interests in criminal and international legal studies.

Born in 1996 in Nantes (France), Emma quickly showed interest in international relations and languages. At the age of eight, she moved to Boston (USA), attending the International School of Boston for two years. This experience appears to be the starting point of her affection for discovering new cultures and ways of life.

Once her family moved back to France, Emma decided to not only learn English, but also Latin, Spanish and German. In 8th grade, she participated in the Brigitte Sauzay Program, which allowed her to live in Hamburg for two months, thus increasing her German skills.

At the Lycée Gabriel Guist'hau in Nantes, she joined the European section, therefore benefiting from more intensive English classes and a History class taugh in English. In 2014, after obtaining her high school diploma with high honours in the Economics and Social Studies specialization, she entered the Faculty of Law and Political Sciences of the University of Nantes. From her first semester, Emma has always showed to be particularly curious of public and international law. She followed the French-German dual degree track for two years before choosing to apply for the Erasmus+ Program.

Since the age of five, Emma has been practising gymnastics in competition. When she was 15, she became a judge and a coach, aspiring to involve herself more in her local club. Two years later, she completed the French counselor certification (Brevet d'Aptitude aux Fonction d'Animation), and since then has been caring for children each summer, who in majority have been put into youth care services. Her awareness of the social care field has led her to volunteer in summer 2015 in an international environmental camp, organized by the Vereinigung Junger Freiwilliger, that took place in Jena. One year later, she completed a voluntary internship at the "Cultural action, Sports and Equipments" department of the City Council of Orvault (France), that also deals with the international partnerships of the city.

Now in her 5th semester of Law, and studying in Passau for one year, Emma hopes that her first experience in mooting will help her to define her upcoming specialization in International Criminal Law.

"I've always intended to use my language skills for a cause that I deeply believe in. The ICC Moot Court Competition will hence not only allow me to improve my debating skills, but also to develop my curiosity for and knowledge in resolving international conflicts."

Anaëlle comes from Angers, France. She is studying law in the 1st semester of her Master's degree.

During her time in High School, Anaëlle entered a European section in order to follow intensive English classes, travel abroad and meet people from different cultures. She had the opportunity to pass a Diploma in European Efficiency and she also became a member of an English debating club. Both experiences helped her develop her curiosity towards political and social issues, as well as international relations.

After passing her Baccalauréat focusing mainly on Science and European Studies, Anaëlle started studying law at the université Saint Serge, Angers, France. She chose Public International Law and Human Rights as majors in her last year of Bachelor which only confirmed her interests for these legal fields.

In order to approach a new insight of law and improve her language skills, she is currently studying in Passau for two semesters, through the Erasmus Program. Greatly motivated by this legal and linguistic challenge, she applied for Passau's ICC Moot Court Team.

Next to her studies, Anaëlle is fond of politics and learning languages, such as Arabic.

"The ICC Moot Court appears to me as a great challenge allowing me to improve my legal English skills. Overall I am looking forward to getting a more practical approach of International Criminal Law and a further insight into this area."

Lorenzo, born in September 1995, graduated from High School in July 2014, where he had nurtured his passion for languages and was simultaneously engaged in "La rete degli studenti" (the Students' network), a political and civil youth association. After graduation, he set off for an internship at the German Space Agency to cultivate his scientific knowledge and to ameliorate his German skills.

Afterwards, Lorenzo was regarded eligible to commence Law studies at the Trento University, which is widely renowned in Italy, especially for its transnational and comparative approach.

In his 4th term, Lorenzo got in touch with Public International Law and Criminal Law, finding both subjects highly alluring. He was fascinated by a lecture held by Judge Cuno Jakob Tarfusser, the Italian judge at the International Criminal Court. As a result, he developed a strong interest in that specific field of law, which spurred him to consider this as a possible career.

Judging the role of law in international affairs and its impact on our society quite intriguing, Lorenzo attended optional classes such as 'The role, status and functions of magistrates' or 'Contemporary Diplomacy, between law and practice'.

Furthermore, Lorenzo partook in the European Youth Event in May 2016 in Strasbourg, organized by the European Parliament. There, he and his team of Commissioners for External Relationships of TEJO (the global esperantist youth organization) advocated the cause of Esperanto. Esperanto is an artificial language created in order to provide a very simple, yet effective tool to allow fair and non-discriminatory communication among people around the world. Moreover, Lorenzo was thrilled to visit the European Court of Human Rights and the Council of Europe.

Deeply struck by the heinous human rights violations represented by the ongoing atrocities being perpetrated worldwide, Lorenzo felt a visceral impulse to seek justice and equity through (arguably) the only possible means: law.

"I am enthusiastic about partaking in this unique competition and eager to handle a case involving international criminal law, suitable for perfecting my legal skills and contributing to my personal development."

Melanie has been interested in internationality ever since her youth. She grew up in England, but she was always surrounded by German language and culture. At school, Melanie's wish formed to do something with German professionally in order to cultivate and ameliorate her language skills. This is why she took up her studies of Law with German Law at the University of Cardiff in 2014.

In 2014, Melanie also worked with a law firm in Bath, where her interest in law, especially family law, grew. She could see how important it is to establish relationships with clients, which allow you to achieve the best possible result for them. Since then, Melanie thrives for a job where she is surrounded by other people.

Additionally, Melanie spent time at a criminal court where she was allowed to observe trial procedures. During her first year of studies, Melanie was already fascinated by criminal law and wants to deepen her knowledge in that area.

Part of Melanie's course is to spend a year in Germany, which allows the student to intensify his or her knowledge in German law. She was attracted by Passau because of the city's and the university's internationality. It is especially exciting for her to study international criminal law with the ICC Moot Court Team. Melanie is a true team player and enjoys the exchange with her fellow "mooties".

"It is particularly important to be surrounded by foreign cultures today, as internationality gets more and more influential in many places. I wish that my experiences during the ICC Moot Court help me to not only develop my personality, but also my knowledge of international criminal law."

Elena is a law student in her 7th semester and is currently completing her major in Criminal Justice.

She has already been interested in international and national politics during her school days, which is why she chose the advanced course Social Studies. Elena travelled to Byron Bay, Australia, in her 10th grade to participate in an English language course and to hence deepen her knowledge of that foreign language. Motivated by that experience abroad, Elena decided to live and work in Canada for a whole year after her graduation from secondary school in 2011.

Elena was attracted by the University of Passau's internationality and hence decided to commence her law studies here in 2012. She is about to conclude the Special Programme in Foreign Languages for Lawyers with main level 2 in autumn 2016.

Elena spent the academic year 2014/15 as an Erasmus student at the Katholieke Universiteit Leuven, where she attended several courses in European and International Criminal Law, Public International Law and European Law in the English language. She also completed an internship at the Mission of the Free State of Bavaria to the European Union in Brussels. Elena learned Flemish and ameliorated her French in a university language class.

Elena's interest in International Criminal Law was awakened in Belgium and thus she decided to become part of the ICC Moot Court Team 2016/17.

"I find International Criminal Law so appealing because it combines various areas of Criminal and International Law. I am particularly happy that I can gather my first mooting experience in the ICC Moot Court Competition." 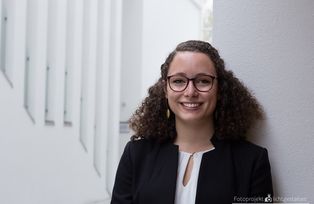 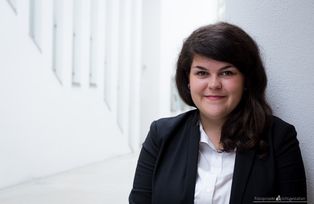 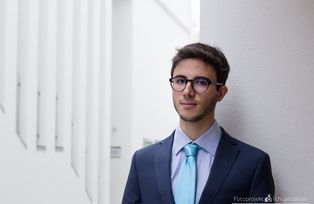 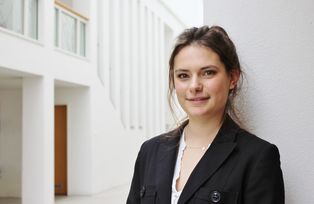 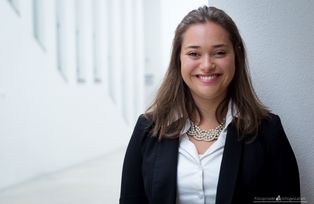 After having participated as Government Speaker in last year's team, Julia chose to support this year's team as Student Coach & Coordinator.